A blog about my data viz journey

It’s TC20 week! What an exciting time for the datafam. This is my first Tableau Conference since I’ve become more active in the community. I was supposed to go to TC Europe in London earlier this year but… the pandemic. So now TC20 is gonna have to be virtual again. But the cool thing about that is how many people from all over the world will be able to participate. I hope I’ll see you there!

But let’s get to the topic this post is actually about: This week’s MakeoverMonday!
Since it is TC20 week, there was also a special Live MakeoverMonday. I managed to join the Monday evening session on Youtube.
So what was different this week? Well, the idea is the same. But the topic was introduced on the livestream and we then had an hour to work with the dataset and submit our viz. After that, the MakeoverMonday team took some time to review some of the results on the livestream. So the big difference for me this week was timeboxing.

I usually don’t limit the time I work on my MakeoverMonday viz. And it often takes me quite a while. Typically it’s not because I lack the technical skills (though that happens too, of course). I typically have a hard time settling on an idea and tend to overthink things. But getting things done quickly is an important skill. So this was an interesting and exciting exercise for me!

So here’s what I ended up with after an hour: 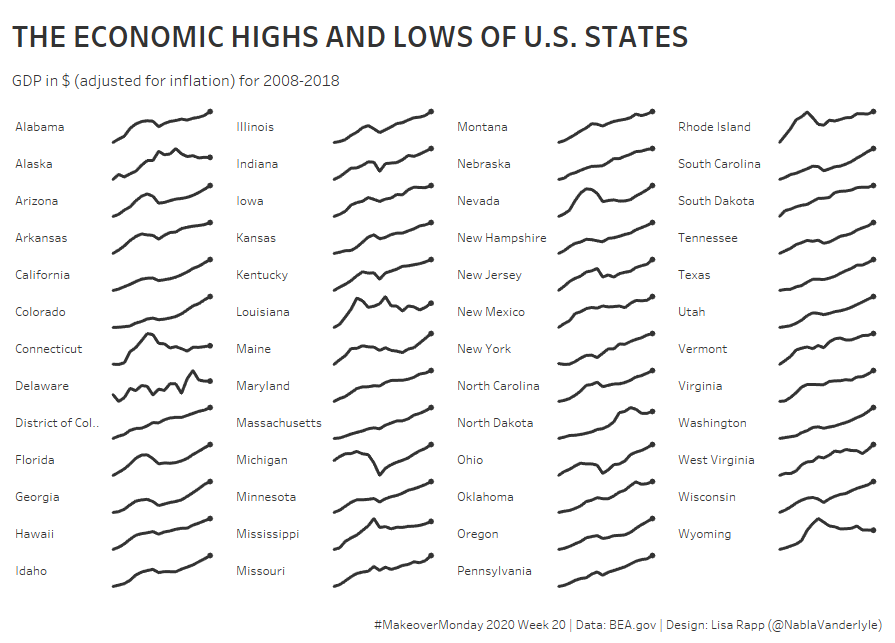 I’m actually quite surprised how much I like the result. It’s simple, you can easily compare different states and you can see some interesting patterns (check out Michigan’s 2008 dip, for example).

How did I end up with that viz?
I’ll let you in on a secret – it was a panicked last-ditch effort in the last 20 minutes or so. And isn’t that how it works quite often? How often do you start working with a dataset, build a viz, only to scratch it and try something else? I guess some people are well-organized, sketch out their vizzes in advance and actually stick to their plan. Well, I’m not one of those people. But in the end, you only see my finished viz and you don’t get to see all of my failed attempts. This week I’m going to change that and show you what happened before I settled on the final viz. 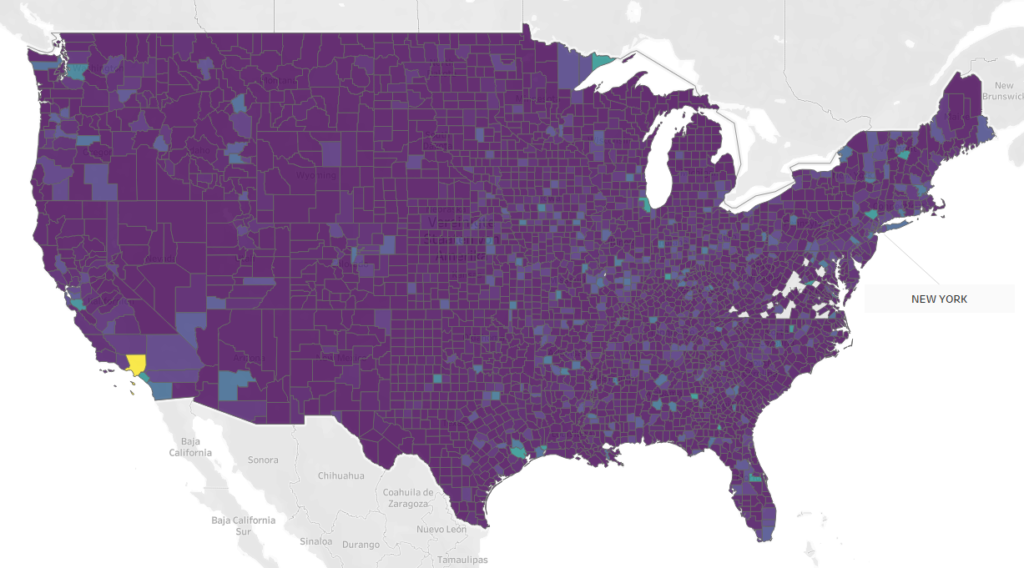 My first attempt was a simple map. I’ve never done a county-level map, so this seemed like a good dataset to try. However, the few very big values make the map pretty useless. And then you also have the usual problem of choropleth maps: Regions with small areas completely vanish. Do you see New York in that map? Me neither….

My second attempt was a slope chart. I was hung up on that idea for quite some time. But as you can see it doesn’t work very well. There are way too many similar lines that overlap into a big mess and I don’t feel like you can gain any real insights from that chart.